Eve is used to being the odd woman out. As the only girl on her school’s baseball team, she knows exactly how to put sweaty, macho baseball players in their place, and she’s focused on one thing and one thing only — being the best pitcher she can be.

But when a freak accident forces her high school to be absorbed by the neighboring town, Eve has to contend with a new group of guys who aren’t used to having a woman on their team. And the new team’s star pitcher, Jamie, has no interest in being ousted from his throne. He can’t afford to give up his starting slot to a new pitcher — even worse, to a girl.

As the competition between Jamie and Eve starts to heat up, so does their attraction to each other. Can they keep their heads in the game, or will they end up getting played?

I live in the Philadelphia area, and a few years ago there was a story about a local female athlete who played baseball and pitched in the Little League World Series. She was featured on the cover of Sports Illustrated and in the press a lot at the time. I remember thinking, “what a bad-ass!” Not just holding your own with the boys, but dominating. I was excited to write a character who had that kind of confidence and spirit.

Well, I don’t know how hidden they are, but I certainly touch on the theme that girls don’t need to conform to some standard of beauty to feel good about themselves or impress other people. Confidence, being true to yourself is more attractive than anything else, right? There’s also the age-old reminder not to judge a book by its cover. Usually, people have way more going on than it appears at first glance. Everyone’s dealing with problems now and again that they’d just as soon hide or cover up with a “front.” You shouldn’t write people off because of what you assume at first glance.

Based on… no. Inspired by… sort of. :) As I said above, especially my main character.

My editors, Holly West and Kat Brzozoswki. I’ve learned so much from working with them. They’ve never made me feel like I need to try to write like someone else or change my style; they’ve just taught me little tricks along the way to make my kind of writing stronger.

Nicholas, Henry, and Logan from Emma Chase’s ROYALLY series for afternoon tea and a backyard Polo match. That sounds fun. :) She writes the best characters and those boys are hilarious. For one thing.

Of course not. Not to say it’s not troubling to have a heaping pile of books. It makes you feel anxious and guilty for not making time for all of them, but that doesn’t mean you shouldn’t take them in! 
Karole lives outside of Philadelphia, PA with her loving husband, exuberant little girl, and smiley little boy. She adores YA Romance, because it would be awesome if life in general had a requisite feel-good happy ending rule. Vices include obscene Haribo gummy consumption, addiction to Starbucks NF vanilla lattes, and tendency to hoard Bath and Body Works 3-wick candles. 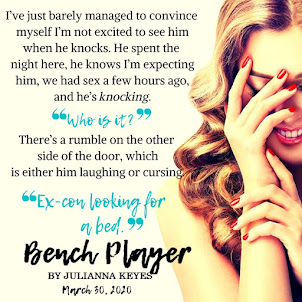